Powershell as a problem solver

During a recent swim, I happened to overhear a conversation between two other people in the pool that was distinctly Korean. I introduced myself and we ended up having a great chat that was probably 70% Korean. After that encounter, I came to the realization that I’ve learned enough of the language that I’m right on the precipice of basic fluency in Korean. To that end, I decided, to resume my Korean studies. One of the skillsets I wanted to work on was my ability to touch-type in Korean. I’m already reasonably OK at the task and can type in Hangul without looking at the keyboard. But I still make a ton of mistakes which of course frustrates the learning process. I decided the first thing I need to do was to obtain that last 15% and master Korean typing. I then went out searching for a Mavis Beacon style typing tutor for Korean. It turns out there is one that rises above all others called 한메타자교사.

Unfortunately, the application was written in 1999 and as such had two issues, one highly annoying and one show stopping. The first is that the application is hard coded to run at 640×480. The second is that it has a really clever game built in that for some reason doesn’t allow accept Korean input. I suspected this had to do with the fact that I was running the application on an English language Windows base OS with Korean language added as an additional IME. After much troubleshooting and trial and error trying to solve the symptoms, I decided to go for broke and fix the problem at the source.

I checked the build date on the executable and it was written in February of 1999. According to this Wikipedia (http://en.wikipedia.org/wiki/Timeline_of_Microsoft_Windows), the most recent version of Windows available at the time this application was written was Windows 98.

I then scoured the Internet to try to find an ISO for the Korean version of Windows 98. This proved to take a lot longer than I would have otherwise expected. But I did eventually find one and installed KO_Win98 into a virtual machine. (As an aside, holy hell I forgot how long Windows 98 takes to install. Even with the modern CPU, memory and SSD backend, it still took almost half an hour to install and *4* reboots! We truly live in the golden age).

Once I had Windows up and running, I installed the Typing tutor and tried the game. It worked exactly as it was supposed to! (Well, after I manually had to go download the SB128 Sound Blaster windows drivers – I almost forgot how to do some of that! J)

The last challenge I had was the resolution. On my 1920×1080 screen, this is what the application looked like running in VMWare in my Windows 7 VM. 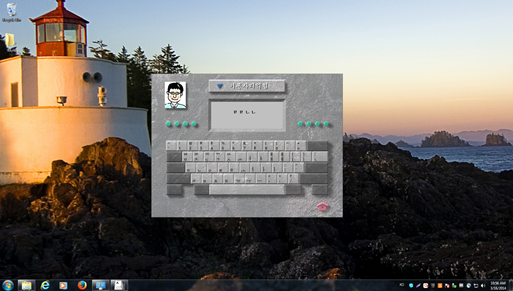 How can I make this full screen? Well since I can’t adjust the resolution of the application, I can only change the resolution of Windows itself. So I set Windows to run at 640×480. That works but it by default centers it in the middle of the screen with giant black borders. 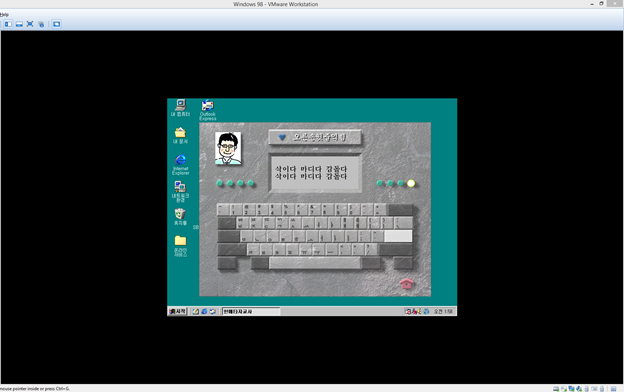 After some investigation and fiddling with options within the VMX file for the VM itself, I eventually realized that this setting is controlled as a preference in VMware workstation under Display:

You want to use the Stretch guest option. This also works if you want to run older games in full screen for example. 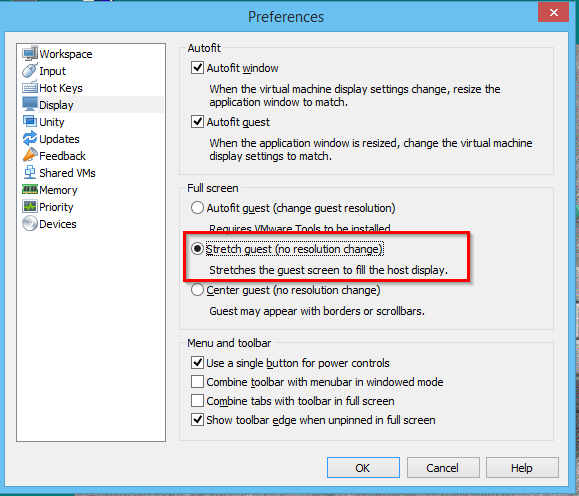 The end result, I now get the following when running in full screen. Note that since the base OS is in Korean, all the Windows 98 UI is also in Korean! Certainly brings back some memories! 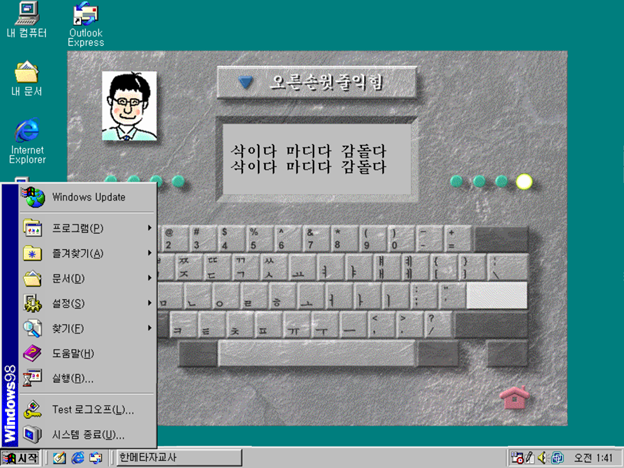 I had a problem (needed Korean typing tutor) and while I may have gone overboard a bit, I have now fully solved the problem. Now let’s see if I can goddamn conquer this language once and for all!

Oh and more thing.  As I was preparing for this, I downloaded a print out of a Korean keyboard so I could reference it.  As I was staring at it, something dawned on me.  Korean was designed from the ground up to be as simple as possible to learn.  With that in mind, you may have heard the urban legend that the first typewriter keyboards listed the keys in alphabetical order but that people typed too fast and broke the typewriters.  To try to fix this, the QWERTY layout was made to try and slow people down.

Well it looks like the designers of the Korean keyboard didn’t get the memo.  Have a look below.  I color coded all the consonants (Yellow) and the vowels (blue).  (With the green overlay being home row).  As you can see they are perfectly split down the keyboard.  Likewise, have a look at the Y, H, and B keys.  The shapes of the letters (which in turn mirror the shape of the mouth when spoken) are also ordered by height.  The one pointing up is at the top the keyboard and the one pointing down is at the bottom.  They thought that through.  Now that I realize that, it is making typing that much easier .