Previously I’ve posted a HOWTO for resolving a CID mismatch issue with virtual machines and snapshots when those VMware are running on ESXi.  That can be found here:

But what happens if you have the same error under VMware Workstation (11)?  Today I had a reason to detach a secondary disk from one VM and temporarily connect it to another. When I was done, I tried to reattach the secondary disk back to it’s original VM.  When I tried to reboot however I received the following error: 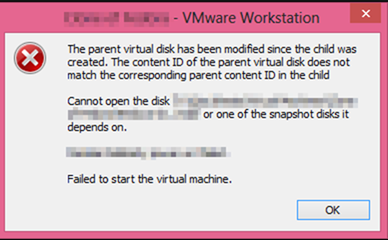 In the HOWTO posted above, this can be resolved by updating the CID and ParentCID fields inside of the plain text .VMDK configuration file for the VM.  Unfortunately that doesn’t apply to VMware workstation because this “descriptor” / configuration data is stored in the same file as the “-flat” disk making it impossible to edit with a plaintext editor such as notepad.  Instead we need to use a Hex Editor.  Don’t worry, this is much simpler than it sounds.

Disclaimer: We are about to make low level changes to the underline disks of the VM.  Please ensure you have complete backups of the files you are about to change before proceeding

That’s it, the VM should now boot successfully.

Note that in my situation, I found that the VM booted successfully but Windows complained that no boot device was found.  I then booted off the Windows installation media and choose “Repair My Computer”.  It detected the boot record was invalid and then automatically fixed it.  When I rebooted the second time, my VM booted as desired.