This HOWTO is fairly specific to me but since I needed to document it anyway I figured I would share it in case in benefited others.
I have scheduled yet another Microsoft Exam for October.  One of the techniques I use during studying is to take the base “Skills Measured” list from Microsoft and build a checklist around it so I can keep track of what to review next.  To do this I traditionally copy and paste the list from the Microsoft exam site and painstakingly edit it to make it compatible with a commercial task tracking software I purchased called Swift To-Do List.  It’s mind-numbing repetitive work and I always tell myself I’m going to try and automate it but never do.  Well that ends today.

What am I talking about exactly?  Well let’s use an example.  I’m scheduled to write the 70-462 – Administering SQL 2012.  So I visit the site (https://www.microsoft.com/learning/en-ca/exam-70-462.aspx) and get something that looks like this:

There are a series of one level collapsible trees that contain all types of items on the exam.  The catch is rather than provide them in a list, the entries are separated by semi-colons.  What would be so much more useful is if I could transform that list into something like this: 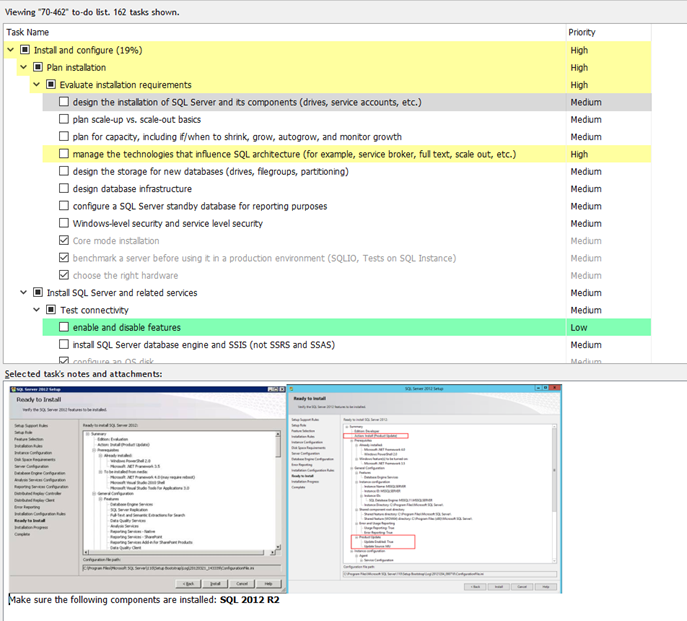 Here I can make notes inline with each line item, colorize them based on difficulty, categorize them anyway I’d like and all sorts of other features offered by Swift To Do List.

So the question now is, how do you convert the list on the Microsoft site to a format that Swift To Do list can understand?  I tried all sorts of methods ranging from downloading the raw HTML and trying to parse it to trying to parse the raw XML of a saved .DOCX file to all sorts of other things.  I eventually stumbled upon the following.

1) Firefox – (Required as other browsers mark the sub bullets with the same character as the parents making them impossible to differentiate)
2) Word 2013 – (Required as earlier versions of Word don’t properly process the bullets provided from FireFox)
3) PowerShell 2.0 or newer
4) The script at the end of this HOWTO

1) Visit the the Microsoft page for the exam you’d like to extract the notes for (eg: https://www.microsoft.com/learning/en-ca/exam-70-462.aspx)

2) Using Firefox, select show all to expand all child nodes, highlight all the exam note text and press Control-C to copy it 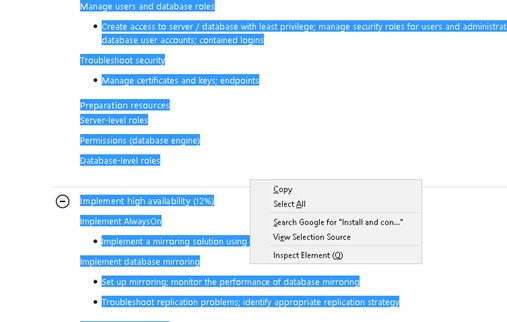 3) Open Word 2013 and paste the data into a new page.  Note that the bullets and sub bullets should be different characters.  If not, the rest of this process will fail 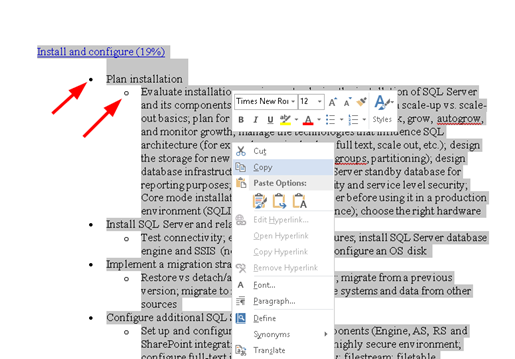 4) Press Control-A to recopy the data into your buffer.  Word will fiddle with the formatting behind the scenes by doing this to make the next step possible

5) Open Notepad and paste in the data.  Note the differences between the bullets in the sub nodes

7) Download the PowerShell script below and save it.  Open a PowerShell prompt, run the script and pass in the path to the text file you created above

8) Open Swift To Do List.  Create a new To Do List and press Control-H to enter multiple tasks at once

9) Paste in the data in your buffer.  Be sure to check Preserve tasks order. Press Add Tasks 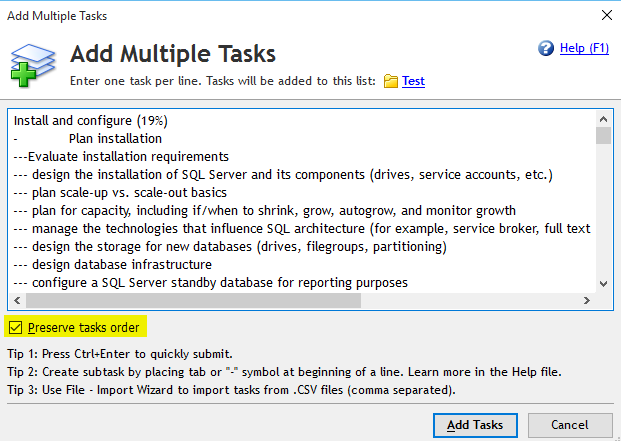 8) Press Shift-[Minus] to collapse all of the tree nodes

9) Shift click on all of the Preparation resources, right click and choose Delete as these don’t apply here

10) Congratulations.  you have have a complete task list for your exam available that you can use to track your studying progress.