HOWTO: Write Vietnamese on a computer

I have previously discussed how to use a Windows based computer to write in Japanese and Chinese.  The time has come to tackle the next of the Asian languages, Vietnamese.  As before, the same disclaimer applies.  The information below is what I was able to figure out based on information primary from Google and Wikipedia.  Some or perhaps even much of it may be incomplete but it does appear to at least be logically consistent.  At first I thought typing in Vietnamese would be considerably easier since the language at first blush appeared to use the Roman alphabet, just as English does.  Therefore, I expected it to be as simple as “Select the Vietnamese keyboard and start typing”.  As I started researching however, I found this was not the case at all.

There are a couple of important things to be aware of when trying to write Vietnamese on an English keyboard.  Let’s assume you’ve used the “Language” Control panel applet and added the “Vietnamese” language already.  Once installed, you press the “Preview” button to see what the keyboard looks like this: 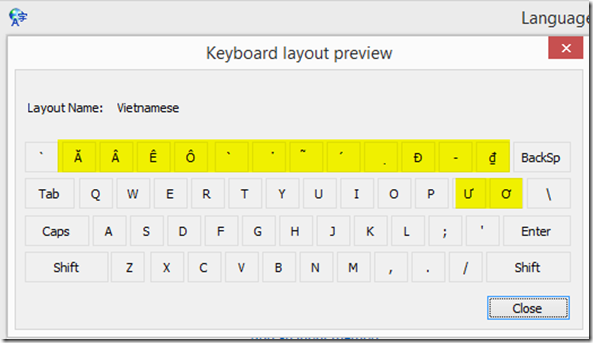 The first thing that will probably jump out at you is that all of the numeric digits on the keyboard have been replaced with special characters along with the open and closed square brackets, dash and equals keys.  Why is that?  To understand this, we’ll have to look at how the Vietnamese alphabet is constructed.

The base alphabet of Vietnamese looks as follows:

Notice the absence of the English letters f, j, w and z.  These letters are not found in native Vietnamese words.

This is followed by the base unique characters in Vietnamese:

Vietnamese makes extensive use of diacritics, or the special accent characters found on the base letters.  In fact, many base letters in Vietnamese can be modified with up to two diacritics at once.  The accent characters themselves help to define the tone of the word.  In English we might differentiate the sounds of the words ‘beat’ and ‘bet’ by introducing more vowels.  In Vietnamese they accomplish this through the use of diacritics.  The advantage this offers is that words themselves are typically much shorter than their English equivalents.  Here is an example of the comparison in action.  Below we have the opening paragraphs of the Wikipedia pages from the English and Vietnamese sites.  Noting that the English entry includes double digit character long words such as ‘inhabitants’ and ‘reunification’.  In Vietnamese however, this is broken down into smaller chunks where each word itself is typically no more that 3 or 4 characters long.

Below is a list of what every letter and diacritic modification of of the Vietnamese alphabet looks like: 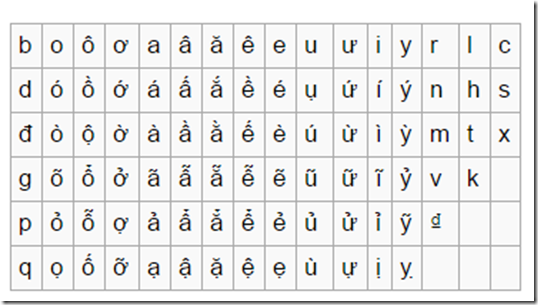 Let’s look at it another way.  The list below is the base alphabet that only includes the major diacritics.  You can see that that several characters have a few related permutations.  All of them are vowels except for D (which confusingly to English speakers is pronounced like the English ‘Z’) 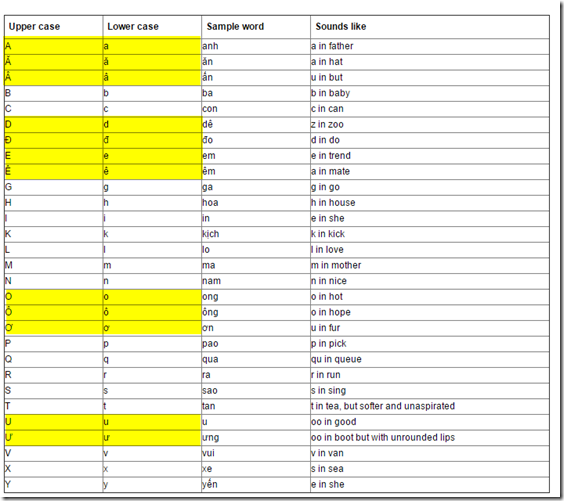 In order to write this language on an English keyboard, you’ll need to take advantage of the built in Windows IME (covered in more detail in my Japanese HOWTO).

There are several different input systems that have been devised for Vietnamese, the two most popular appear to be “Telex” and “VNI”.  It seems that the two systems have developed different followings within Vietnam itself with the Northern part of the country adopting primarily the Telex system while the South has popularized the VNI system.  It appears that Microsoft, for both Windows 8 and Windows 10 have only included native support for the VNI system so that is what we are going to demonstrate here.

To write the sentence above we must first switch to the Vietnamese VIE writing system from the system tray: 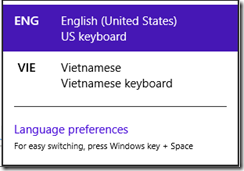 The biggest thing to understand is that the number keys have been commandeered to provide input for the diacritics.  That is to say, once you activate your Vietnamese keyboard, you will no longer be able to type numbers without first pressing the right (and only right) alt key.  The numbers have the following purposes:

1 – 4 have been replaced by the Vietnamese vowels ă, â, ê and ô respectively.

So with that out of the way, let’s say we want to write the phrase “I want to learn to write Vietnamese”.  According to Google Translate, this phrase written in Vietnamese (or tiếng việt) would be:

In order to write this, we have to make extensive use of the numbers along the top of the keyboard to provide those special accent characters.  The exact keys you need to press are:

That certainly seems a little unusual but really no more so than than input methods demonstrated for Chinese, Japanese and Korean.  I’m sure once you got the hang of it, it becomes second nature.  Heck even through the course of writing this HOWTO, I found I could type the phrase above increasingly without hesitation.

That’s now all I know about typing in Vietnamese on an English keyboard.  I hope you found this informative.

There is an additional character mapped to the +/= character that looks like this:  ₫

This is the symbol for the Dong, the Vietnamese currency symbol.  This is akin to the $ in English, ₩ in Korean or the ¥ in Japanese and Chinese.  It goes to show you  how often we write about money and the patriotism and pragmatic differentiation that is wrapped up in every language that chooses to devote an entire precious physical key in the limited list of keys to assigning their unique currency symbol.