Microsoft has released released a technical preview of its upcoming consumer desktop operating system Windows 10.  Anyone can download it (amazingly, you don’t even need to sign in or sign up for anything to grab it!) from here: http://windows.microsoft.com/en-us/windows/preview-iso

I’ve been playing with it for a few minutes now and already I’ve noticed something fundamentally different compared to the Windows 8 preview.  Back then when I first loaded it up, I immediately found myself cursing at the new start menu.  Unfortunately, other than this blog and various forums, I had no venue to voice my frustrations and certainly no venue where my complaints wouldn’t disappear into the abyss.  Flash forward to this Windows 10 technical preview and I was shocked by a dialog box that appeared when I tried to open the control panel.  It asked me: "Do you prefer to use the control panel or the PC Settings panel by default?" This wasn’t an OS configuration setting though.  No, since this is a preview, this was a feedback prompt.  I was being asked not only what I wanted, but given an opportunity to say why!

I then started exploring this a little further.  I noticed that there is a search icon on the start menu that annoys me and I wanted to remove.  Surprisingly (or perhaps not), I discovered there was no obvious means of removing it.  That’s when I ran the "Feedback" app right from within Windows 10.  After registering my (test) Windows Live account, I found this: 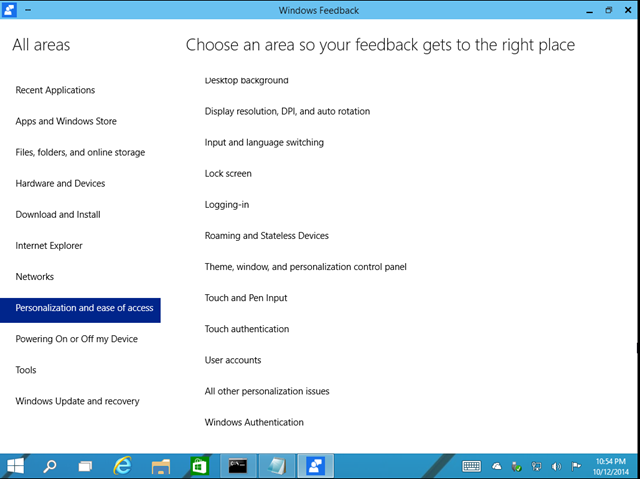 That’s right, the app provides a pre-defined list of categories so that your feedback can automatically be funneled to the correct team!  In this case, I browsed to "Personalization and ease of access" followed by "All other personalization issues". 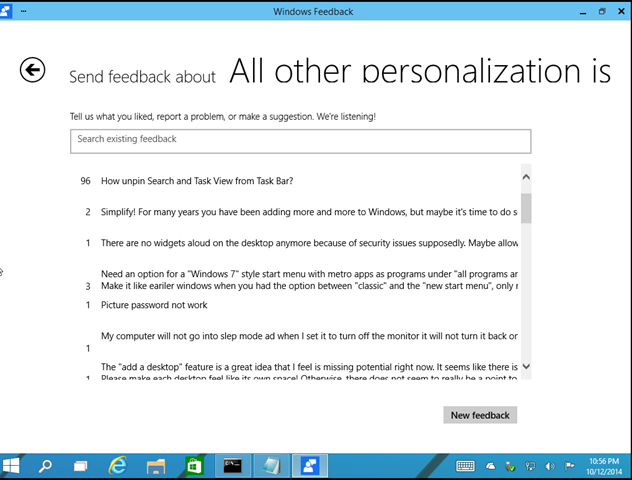 It then displayed a list of feedback other users have already given (in all the creative grammar glory that is the Internet) including notably the number of people that "like" each comment!  Now granted it still displays in the god awful Windows 8 style "let’s waste as much white space as possible so you can’t see all of the content you care about" and the columns aren’t sortable but it’s still an incredible step forward from the last major OS release from Microsoft!  Sure enough, we find in this request to remove the search field that 96 other people have already voted up.

With new management in power at Microsoft and a renewed sense of urgency on their part to prepare themselves for the next decade, I think this marks a seminal time where we as individual IT professionals will have the ability to directly influence the products we use every day.  This is democracy in perhaps the most useful form we’ll ever get.  But I suspect it’s an experiment.  If we don’t take advantage of this open line of communication, I’m certain it won’t be around for the next iteration. Therefore I implore each and every one of you to download the Windows 10 Technical Preview and install it on your VMware Workstation, VMware Player, VirtualBox, Hyper-V or whatever is your virtual platform of choice and take it for a spin.  Not only that, but every time you run into a frustration or something you wish was different, make sure you provide detailed and useful feedback on your frustration.