It all started with a happenstance device I found on Amazon called the NAS2U Adapter from Addonics.

The device was intriguing in its simplicity.  Plug in a ethernet cable into one end and a USB mass storage device into the other and suddenly you have an instant Samba/FTP server based NAS.  I found the idea intriguing enough that I bought one just to experiment with.  They are selling for around $40US on the American Amazon store but unfortunately the mark up in Canada is significant as this unit cost me $82.92 with shipping.  Once it did show up, lets have a look at it, shall we?

As you can see, the device is incredibly small, about half the width of a standard CD.  So what can we do with this? As I mentioned earlier, it’s likely that you only have a handful of files that you absolutely cannot lose.  In my case, those work out to be about 50MB in size.  Which brings us to the first complaint people have about this device that for my situation at least is irrelevant.  You see, the performance from this thing is, shall we say, pretty horrible.  I’ve maxed out at 3mb/s reads and only 1mb/s writes.  Sounds pretty crappy, right?  But again remember that in my case (and I suspect in others if they really prioritized their data), I’ve only got about 50MB to work with.  More importantly though, the offsite destination I’ve opted to use will be my parents house and they only have a 10mbit/512k connection.  So the reality is it doesn’t matter how fast the device can read since my bottleneck is going to be the destination internet connection itself.  The other limitation people have complained about is that the USB device used must be formatted FAT32.  Again however, since I don’t need to store any files over 2GB, that does not impact me.

This brings up the next point.  What do you use for storage?  Well since we have identified very small storage requirements, really any USB key will work.  In my case, I have a literal stack of USB keys provided as gifts from various vendors over the years.  This ends up happily solving another problem of how to handle storage failures.  I have experimented with this device where I’ve copied a bunch of data to it, pulled out the key and stuck it directly into my computer.  I can read the data just fine.  I then pull out the key and stick in a different key and effectively instantly it shows up as expected.  This means that it’s trivial to swap keys which is handy as it means I can provide a stack of USB keys to my parents and if I detect a failure I can simply call them and ask them to swap the keys.  The question now is, how do I detect a failure?  We’ll address that shortly.

Now let’s have a look at how the device itself functions.  By default, it will grab a DHCP address and then provide both Samba and FTP through anonymous read/write access.  From there you can UNC into it by using \\DHCP_assigned_IP_Address, by FTP at DHCP_assigned_IP_address or connect to its web management interface using the its IP.  Let’s have a look at that management interface now, shall we?

As you can see below, there isn’t a lot to this thing but in my eyes at least, I see that as a plus.  Fitness for use and all that.

In our case though, we want to disable anonymous authentication and add a new user.  Recall that this account will be public Internet facing.  But don’t worry, we’re not going to rely on FTP as our security mechanism as you’ll see in a moment. 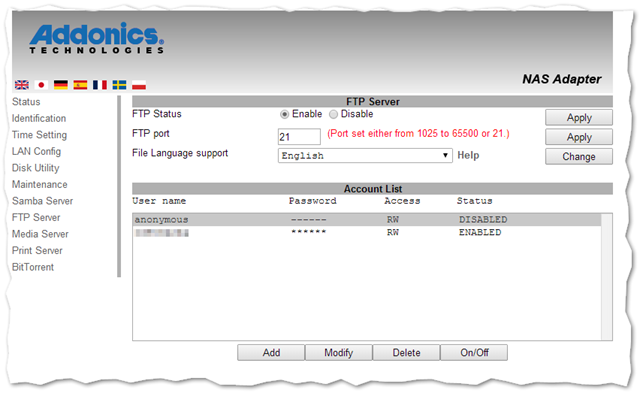 So we now have our offsite storage configured but what do we backup, how do we back it up and how to we protect the data from unauthorized sources?  The specifics to these questions will have to be addressed in a separate blog post but for now, I can tell you the high level I use to great success:

Put another way, lets summarize what you’d need to do to get this working for yourself:

The last problem we need to solve is how do we know if our backups are valid.  As the saying goes, "no one cares about backups.  Everyone cares about restores.".  Wouldn’t it be great if we could automate the process of validating these files and perhaps even get an email telling us the status so we can have that warm and fuzzy feeling?  You’re in luck.

Below is a modified script that I use to automatically validate my backups.  Now it’s important to note that I’ve gone and ripped out a bunch of stuff from the code so the script below is not tested in any way so use at your own risk.  But if nothing else, I suspect it’ll be really useful from a learning perspective.  For example, I never found a really simple way to do FTP of multiple files through Powershell so I ended up coming up with the solution below largely through piecing together lots of different blog posts.