Subversion does not support or maintain per file revision history numbers. Instead, it only keeps track of changes at the repository level. In other words, consider this:

Do you see what’s happening there? File1 now has a revision number of 4 despite it only having had to commits on it. Put another way, since I’m keeping all of my scripts in one repository, this could mean that if I don’t touch a file for a long time and then later make a change, its version could go from version 4 to version 217 in one commit. That’s the bad news. The good news is, the revision number on each file is the last time they were changed. This is the property we are going to take advantage of. 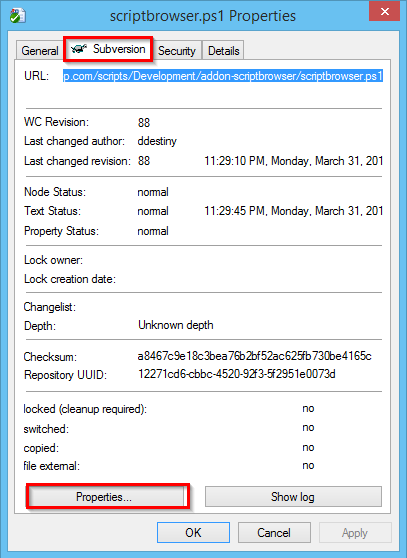 You can now use the copy script to deploy this to your production folder. Then later if you want to know if you are running the most current version, compare this line in your file to the latest version for that file from Show Log

The more I use of this source control stuff, the more I love it. I’m having way more fun than I should!