For those of you that live in Canada, you are no doubt aware that the Bank of Canada recently increased their policy rate from 0.5% to 0.75%.  I heard of a lot of media reporting that said this is the first change in 7 years.  I further read that we could expect further increases in the near future.  Since this policy rate directly impacts the rates that regular consumers get on any new loans and impacts even existing with variable rates, it seemed important to understand how this rate has fluctuated over the years.

To that end I did some research and found that on the official Bank of Canada website, you can download a CSV containing a list of every single day for the last 10 years and what the interest rate was on each of those days.  That is available here:

I wanted to know what the shortest number of days has been between interest rate changes.  Given the large scale impacts of changes to this rate in the country I assumed it would be something that was done exceptionally cautiously and once changed, a long waiting period would take place to review the impact.  According to my research though this assumption doesn’t appear to hold true over the last decade.

First though, a comment on the news reports that this is the “first change in 7 years”.  That claim turns out to be patently false.  The recent change represents the first increase in 7 years.  Over that time frame however we’ve seen 2 decreases to the rate.  Below are my findings:

What I take away from this data is that my original assumption that rate changes would be fairly infrequent due to their impact and needing time to monitor the impact of those changes does not hold true.  The Bank of Canada is both able and willing to make rapid back-to-back changes with 10 of the last 16 changes over the last decade occurring in just over a month between each other.

If we were to see the policy rate increase back to its 2007 era highs, what is a worst case scenario for that assuming the increase happened at the same rate as the historical decreases?  I don’t think that is likely but let’s see what the data tells us.

Let’s pretend for the moment that the rate now increases by the same rate and time frame that the decreases occurred in 2008.  The highlighted sections occurred over 504 days or about a year and a half and resulted in a change of 4%. 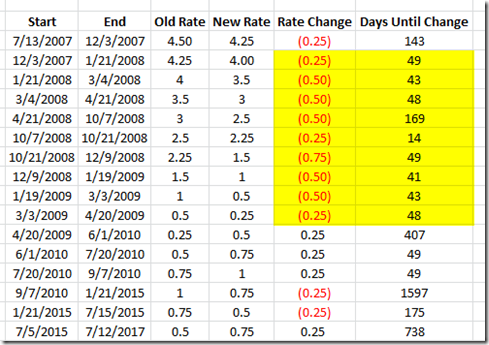 I’m far from an economist but I figured I’d share this data in the event anyone else found it as interesting as I did.