HOWTO: Fix vRanger "The database transaction was rolled back" Error

Update: Andrew G in the comments posted a link to a newer version of this script for newer versions of vRanger.  You can find that link here:

This HOWTO describes how to resolve an issue with vRanger 6.0.1 whereby ALL jobs be it existing or new, incremental or full always fail with the same error: “The database transaction was rolled back” as demonstrated by this sample email log:

There are numerous possible causes for this error.  However, if you are having is for all backups, the most likely cause is your database is full. By default, vRanger 6.0.1 uses SQL 2005 Express MSDE.  Besides being free, it has the baked in limitation that no single database can exceed 4GB in size.  “The database transaction was rolled back” indicates you have maxed out your allocation.  How can you confirm this is your issue?

END_OF_DOCUMENT_TOKEN_TO_BE_REPLACED

This HOWTO describes the fastest way I’ve figured out thus far to deploy net-new Windows 2012 VMs using VMware Workstation for a Lab environment.  The first thing we need to do is build our "golden master" VM.  For our purposes, we will be using the Windows 2012 R2 180 Trial ISO which is freely available to download from Microsoft.  (Note, this script assumes you have already created a domain controller.  If you have not, then the domain joining functionality of this script will fail obviously.  I’ll likely create a new post on how to automate the deployment of that too at some point.)

END_OF_DOCUMENT_TOKEN_TO_BE_REPLACED

Have you ever wanted to publish Powershell code (or other languages) directly to a WordPress blog such that it automatically is syntax colored and line numbered?  Now you can!  Here’s how:

END_OF_DOCUMENT_TOKEN_TO_BE_REPLACED

First let me say that I take back everything nice I ever said about Enterprise Vault.  It’s a Symantec product and that heritage shines through.

I was tasked with removing two permissions from an EV archive for  let’s call him “A User”.  Simple, right?  Ha!

I connected to our EV Server and opened the Admin Console.  I browsed to Archives, found A Users account, double clicked on it and went to permissions.  I find a SID and along with two additional users that I’d like to remove.  I select each of them and press remove. It tells me it can’t because “the permissions are automatically set“. 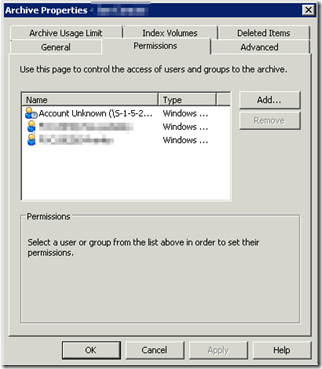 END_OF_DOCUMENT_TOKEN_TO_BE_REPLACED

I created the script below to back up the DHCP servers in our environment, set it up as a nightly scheduled task and then frankly forgot about it.  That is until a few days ago when due to a power outage, we lost a DHCP server that refused to boot once power was restored.  Thanks to this script, restoring my DHCP server was trivially easy.  Since it so greatly saved the day for me, I wanted to make it available to you as well.

To restore from these backups, complete the following few steps:

1) Copy the backup file to the DHCP server you wish to restore to
2) Ensure the DHCP role is installed
3) open an administrative command prompt and run the following command:
netsh dhcp server import [path to file] all

The DHCP scope, configuration and lease information should now be restored.

Oh and I almost forgot to mention the best part.  This script does not require configuration.  Just run it and it’ll automatically go out and find all of the Active Directory authorized DHCP servers in your entire Domain and back them all up automatically to a central store.  (Ok, so you have to define that).  This worked especially well when after I rebuilt my new DHCP server I was surprised to discover it had already been backed up!

END_OF_DOCUMENT_TOKEN_TO_BE_REPLACED

As my knowledge of Powershell has increased, so too has the length and complexity of the scripts I create. My current record for example is a 387 line script. How did I keep track of all of the changes in a script of this length? 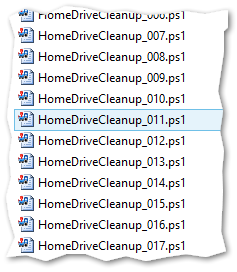 Not very well I’m afraid. I knew there had to be a better way. I was familiar with the concept of Source Control from the likes of Team Foundation Server but had never looked into it. As I sat down to figure out what my solution would look like, I identified the following requirements:

As you can see, my requirements are rather universal and I’m sure are shared by other aspiring Powershell script writers around the world. So you can imagine my surprise then when upon starting my research into options I was surprised to find remarkably little information on this subject. There were pockets of information but they were scattered at best and others simply did not seem to exist.

That’s why I created this HOWTO. It represents many, many hours of trial and error on my part to come up with a Powershell centric source management system. Not only will this guide identify what you need and explain HOW to install it but it will also delve into WHY it is configured this way. My pain is your gain. So with that out of the way, let’s get started!

END_OF_DOCUMENT_TOKEN_TO_BE_REPLACED

As I have gotten more confident with Powershell, my scripts have grown longer and longer. I use PowerGUI as my IDE of choice and I have been quite happy with it. One of the problems I’ve increasingly run into however is that as the code grows in length, it becomes harder to visually read and follow the code to pinpoint what you want to work on. I know that Powershell supports the Region/EndRegion commands but that still made it difficult to distinguish one section from another visually. I looked into alternatives but after fairly extensive Google searches was surprised to find on one else commenting on this. I did however find a PowerGUI addon called “Script Colors”. Unfortunately that didn’t offer any configuration for the region command but did discover that this script was just making modifications to an XML configuration file. I then decided I’d see if I couldn’t tackle this myself. Before we delve into how to do this though, let me show you what the end goal is.

The first screenshot below is of the default color scheme in PowerGUI. (Note the code is random gibberish and is there only to fill space for the purposes of this demonstration)

END_OF_DOCUMENT_TOKEN_TO_BE_REPLACED

What do you do when you need to provide a password in a batch file or to a legacy command line application but don’t want to store the password in plain text inside of the file? As usual, it’s Powershell to the rescue.

The basic steps are: