This HOWTO describes how to resolve a situation where a running virtual machine suddenly abruptly powers off and when you attempt to start it again, you are given the error “the content ID of the parent virtual disk does not match the corresponding parent content ID of the child”.

In this instance, a virtual machine called FSRVCLOAPP17 failed in the middle of the night.  An attempt to manually power the VM back on resulted in the error: 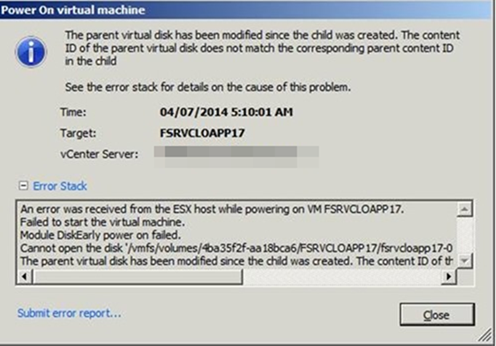 The VM had a warning on it that stated “disk consolidation is required”  If you tried to complete this consolidation however, you will be given an error “CID_MISMATCH”.  There is an imposing VMware KB article on how to resolve this issue here:

The rest of this HOWTO will basically provide a picture walkthrough of the VMware KB Article.

Warning:  If you are not comfortable with the VMware CLI or the concepts presented here, do not proceed and instead call VMware.  It would be very easy to permanently corrupt the VM if these steps are followed incorrectly. 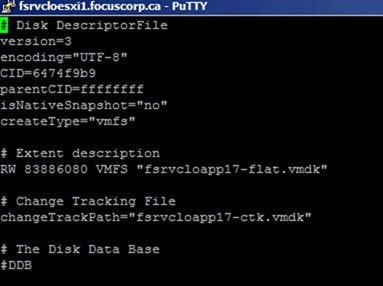